Recently Carbon Free Dining visited Tanzania, an area which has been suffering from abject poverty.
Carbon Free Dining is currently planting fruit trees in Usambara mountains in northeastern Tanzania in East Africa. A region which has suffered devastating consequences from deforestation, which has left local communities struggling to make it from day to day.

Deforestation has affected the people of the Usambara mountains in more ways than one. Trees provide stability and nutrition to the soil, an absence of trees had led to landslides and infertile land. 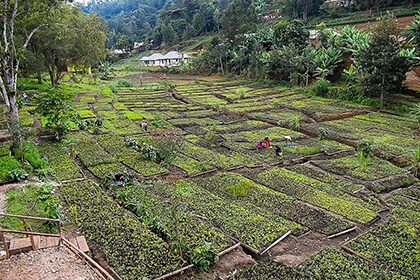 Traditionally the local communities and farmers would use a system call agroforestry, a combination of agriculture and forestry which has many benefits such as biodiversity. However, because of the soil erosion due to the lack of trees, this method of farming is dissipated, leaving parents without the funds to give their children an education.

Historically Tanzania has been famous for its plethora of animals and creatures, however, the list of endangered creatures, unfortunately, is growing at a rapid rate, largely down to the lack of trees. Many species have been completely lost.

As you can see, Tanzania has really felt the effect of deforestation. Farmers are left without land which food can be grown, parents do not have the food to sell to provide an income to send their kids to school. As a result, the region often relies on foreign aid to help them survive day to day life. 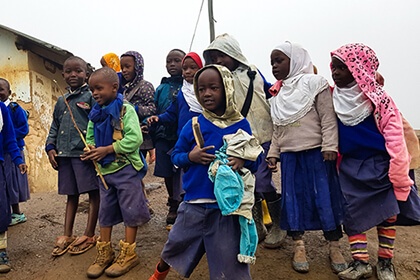 We have seen first hand, farmers being able to plant crops in fertile land meaning they can once again provide for themselves. Locals are able to take excess fruit from the trees to sell at the local market, allowing them to send their kids to school. The trees are providing a circular economy which is genuinely having a positive impact on every aspect of life. Ultimately what is happening is a decreasing reliance on foreign aid.

Here at Carbon Free Dining, we want to say a huge, heartfelt thank you to our partners and their diners, as without them none of this would be possible. It is down to you're passion for sustainability and helping put an end to poverty that together, we are changing the lives of so many people.